Three projects won the first edition of the SSE – Sirio Sistemi Elettronici Spa Challenge during the final phase that took place in the past days in Engineering School’s Caminetto Room, located in Via Santa Marta, Florence. The Challenge consists of a preliminar selection phase followed by the final stage where the top three ranking projects are presented to the public and the panel. 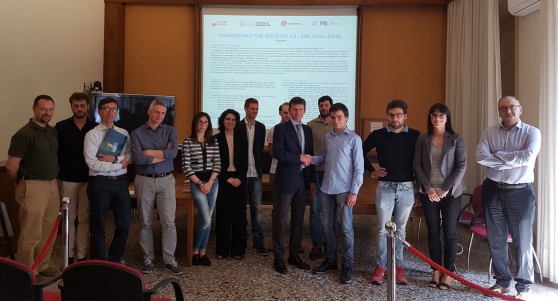 The Challenge is financed by SSE – Sirio Sistemi Elettronici S.p.A. and is coordinated by PIN S.c.r.l. didactic and scientific services for Florence University, also in collaboration with Florence University Engineering School and Career Centre.

The winning projects are Ball and Plate, DollyDroid and Lego Bike Project.
The first one, created by Simone Baratella, Cosimo Nocentini, Giacomo Rossi and Manuel Zeloni, is a model of rapid prototype on Arduino control system for a Ball & Plate process applied to educational robotics; Andrea Aglietti’s and Gabriele Posca’s DollyDroid was created as a functioning prototype and is a camera-mounted motorized handling system for Time-Lapse video acquisition; whereas the Lego Bike Project – by Nicolò D’amico, Alessandra Lombardi and Daniela Straziati – is a control system for a self-stabilizing Lego bike maintaing a straight line.
SSE’s engineer Michelangelo Guarducci stated that «all three projects turned out being equally deserving so we decided to award them all».

In the words of SSE’s engineer Jacopo Pazzi, who explained the reasons of this choice,  «the DollyDroid project shows a product-oriented business approach, developed by a multidisciplinary team; Ball and Plate is a customer-oriented, almost finished product already usable; Lego Bike Project’s features are the strong methodologic bases and the validation of very advanced theories, besides the quality of the communication».
This is the first edition of SSE Challenge – Engineering for industry 4.0 which represents a remodeling of the old Sirio SPA award, officially terminated in 2015 after 10 editions.

The Challenge is open to Florence University Engineering master classes and is meant to value the commitment of those who, either individually or in a team, designed and presented during their classes a project falling into the “Industry 4.0” sector in terms of technologic transformation, innovation and industrial development potential.
The Challenge puts up for grabs a prize cash of 1.500 Euros.